I was also very impressed with the Niro EV’s cornering ability. Curving through the hills of 17 Mile Drive, the vehicle stayed low in its center of gravity, rarely getting top heavy or making me feel like I’d need to slow down to avoid overshooting a turn — two niggling issues I noticed during the Kona EV drive.

Now, if that gets your blood pumping, don’t worry, Kia offers four drive modes to help blunt that effect. You’ve got Sport mode which prioritizes performance over battery charge. Then there’s Normal, which seeks to balance power output and battery capacity; and Eco mode which, as you’ve probably surmised, cuts into the fun in favor of maintaining a charge. During my test drive, we generally kept the vehicle in Eco or Normal for city driving but bumped it up to Normal or Sport for freeway jaunts.

The fourth mode is Eco+ and it is what you put the car into when you’ve been having too much fun in Sport, realize you’re nearly out of charge and are still 30 miles from your house. It is a glorified Limp mode that cuts power to non-essential systems like A/C and heat, limits the top speed to 60 mph, and boosts the regenerative braking to its maximum in order to wring out every last precious watt from the cells before they die and leave you standing on the side of the road.

Now, don’t get me wrong, the Niro EV is in no way an unattractive car. This isn’t your Aunt Linda’s taupe-on-beige 1992 Toyota Camry LE. It’s a stylish crossover SUV — that just happens to look nearly identical to the existing Kia Niro hybrid. Still, there are a few cool accents that the EV team worked into the new model, such as full LED head and tail lights, turquoise accents around the bumpers (and, if you spring for the EX Premium package, throughout the interior as well). You’ll also notice an arrowhead motif in the wheel and turn signal designs if you squint just right. 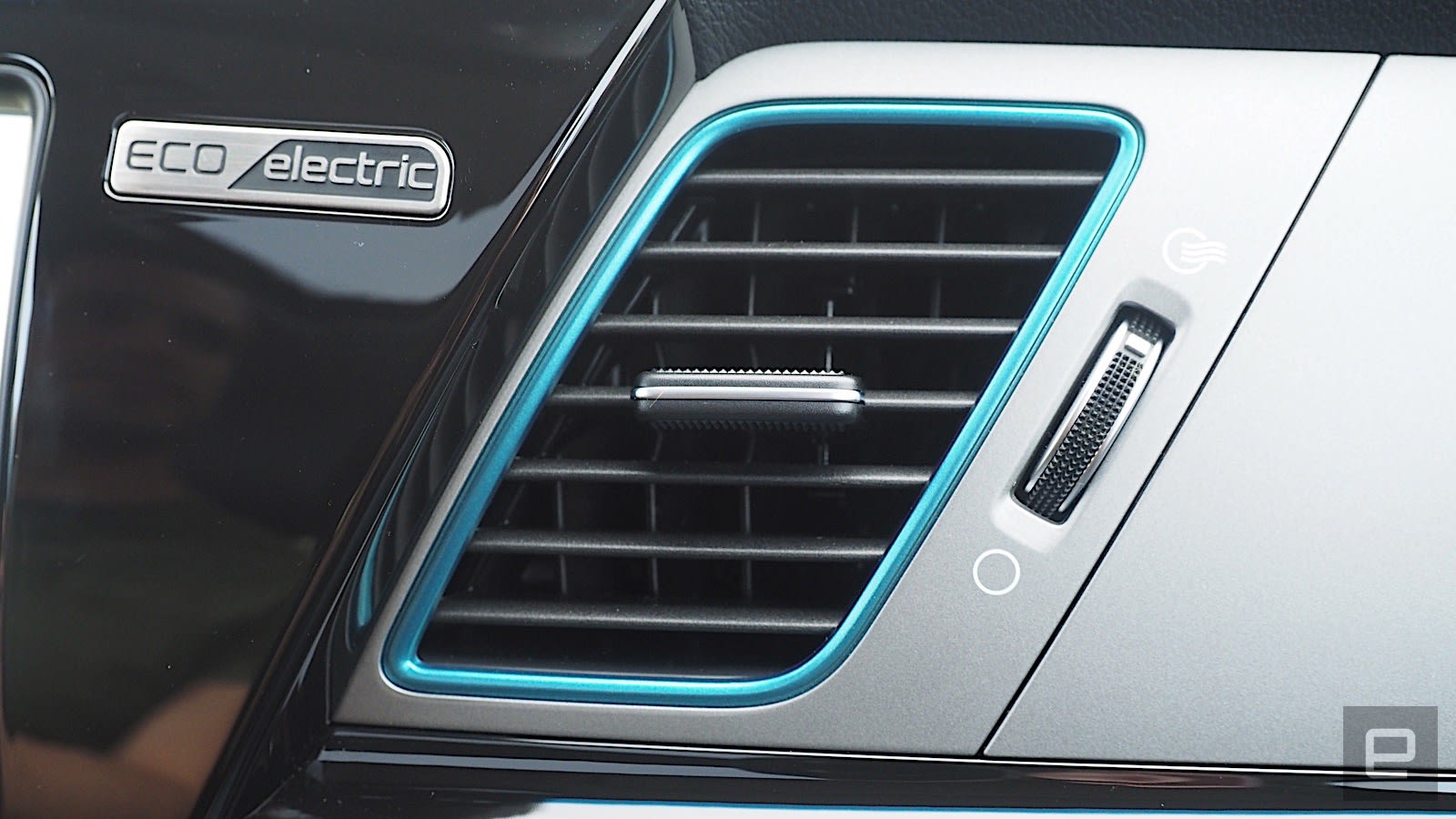 But perhaps the most useful innovation is the front grille which holds the charging port. A bunch of existing EVs situated the port in the rear of the vehicle, forcing you to back into public charging spots like one of those people. You know, the guys that back in because they “might need to leave in a hurry.” With the Niro EV, you can park like a person who isn’t about to commit a felony in the next 20 minutes and still charge the vehicle’s battery. It’s a win-win.

That 7.2 kW charger behind the front grille can refill the battery to 80 percent capacity in anywhere from 1 hour using a 100W DC Fast Charging station to 59 hours with a standard 120 V wall outlet, though you’re looking at just over 9 hours for a level 2 AC charger. That’s even with the Kona EV’s charging requirements.

In short, the Niro EV provides drivers an economical and ecologically friendly means of porting themselves and their stuff through urban and suburban environments. This vehicle is ideal for errands and commutes. We drove from Santa Cruz to Monterey and back again and still had 134 miles of range to spare — it should be able to last a work week being driven round trip across town. And in terms of interior and cargo space, the Niro EV is pretty on par with its competition. The rear cargo area is 18 cubic feet, expanding to 53 cu ft if you fold the rear seats down. With about 40 inches of head and leg room, the driver and front passenger at least will have plenty of space to stretch out. 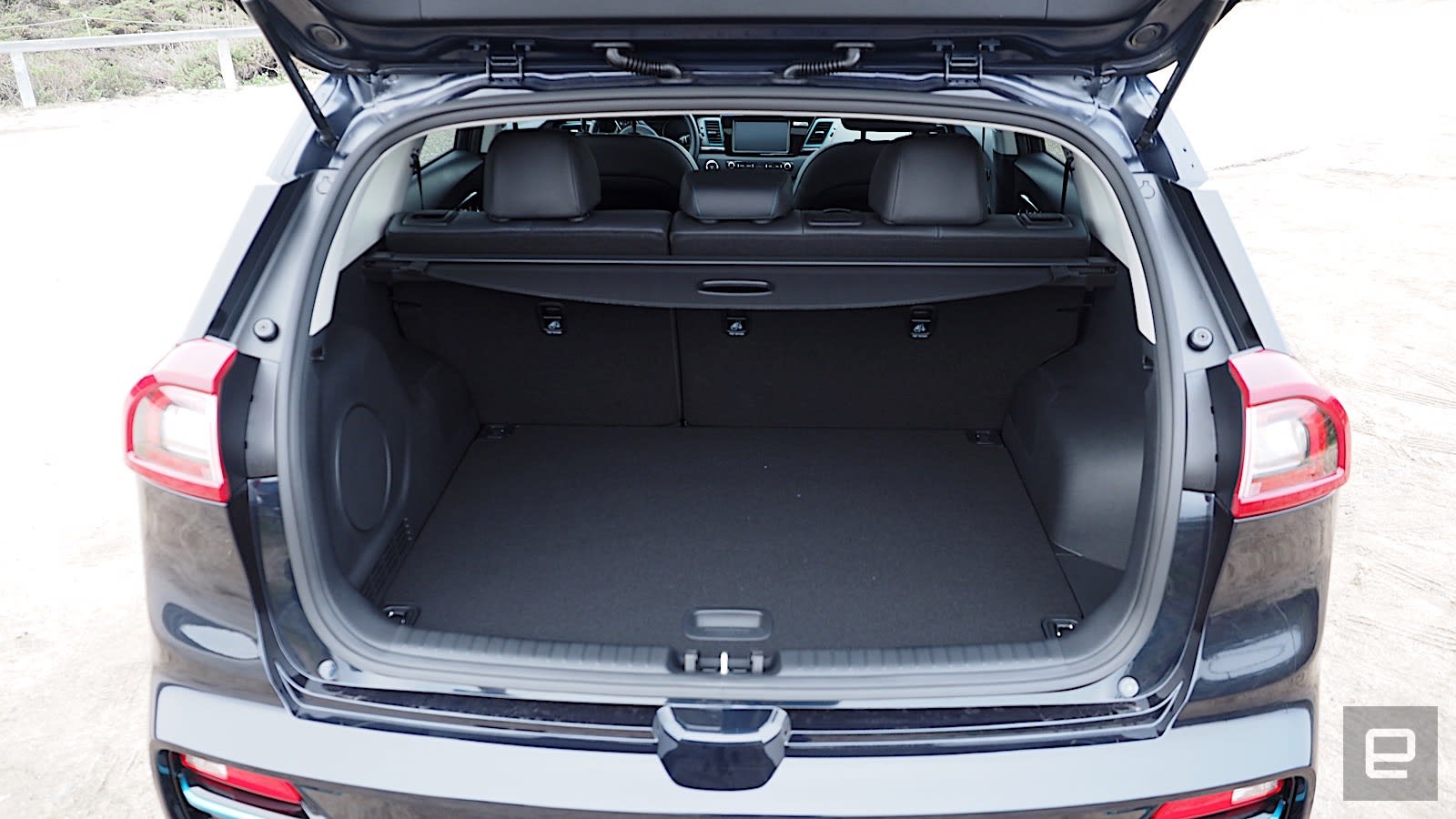 As you’d expect from a brand like Kia, the Niro’s interior is well appointed with a variety of high-tech features that people have come to expect. The base EX model offers a seven-inch color touchscreen/backup monitor with Bluetooth connectivity, Apple CarPlay and Android Auto integration, and Qi wireless device charging. Drivers will have access to Kia’s DriveWise driver-assist system in the Niro EV as well. You’ll get forward collision warnings, assisted emergency braking, blind spot monitoring, lane keeping assistance, smart cruise control and Level 2 highway autonomous driving, among others.

If you opt for the EX Premium, that seven-inch touchscreen grows by an inch, the steering wheel will come heated, the seats will come leathered, and Kia will even throw in some integrated mood lighting that bumps and pulses to the beat of the music coming out of the upgraded eight-speaker Harman/Kardon setup with amp and separate subwoofer. 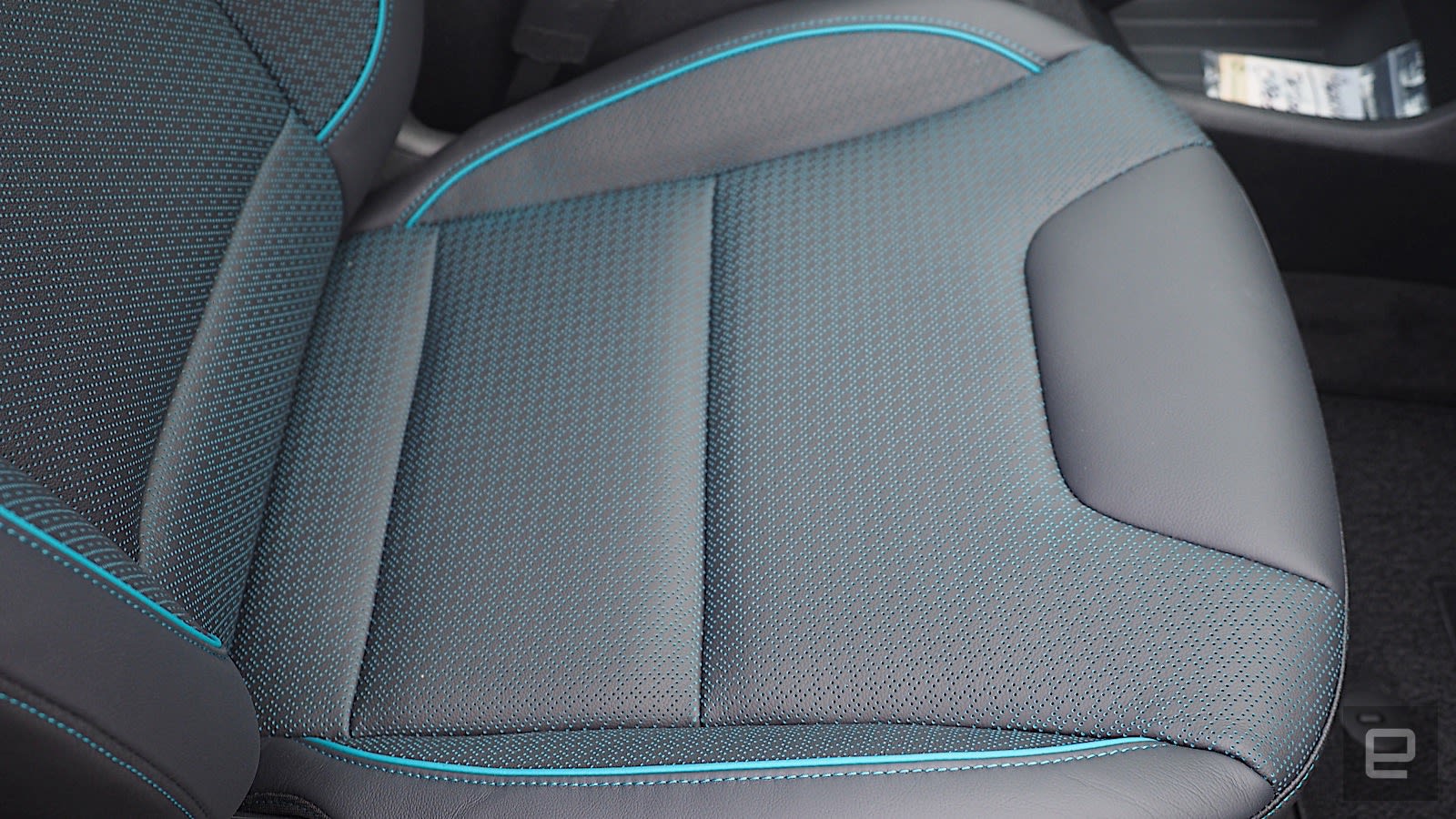 The Kia team couldn’t reveal pricing options for the Niro EV just yet, though they strongly suggested that it would be on par with Hyundai’s offering. That’s going to leave a lot of potential EV customers with a difficult choice on their hands. The vehicles share similar powertrain specs, though the Kona has a 20-mile advantage on range. On the other hand, the Kona’s center console looks like the helm from a Star Trek spinoff, which will likely be rather jarring to not-so-tech-savvy drivers. The Niro EV’s far more closely resembles the instrument clusters of existing vehicles, which means new owners will have more time to dig into, say, the various driver assist features rather than figuring out where the electronic parking brake release switch is. 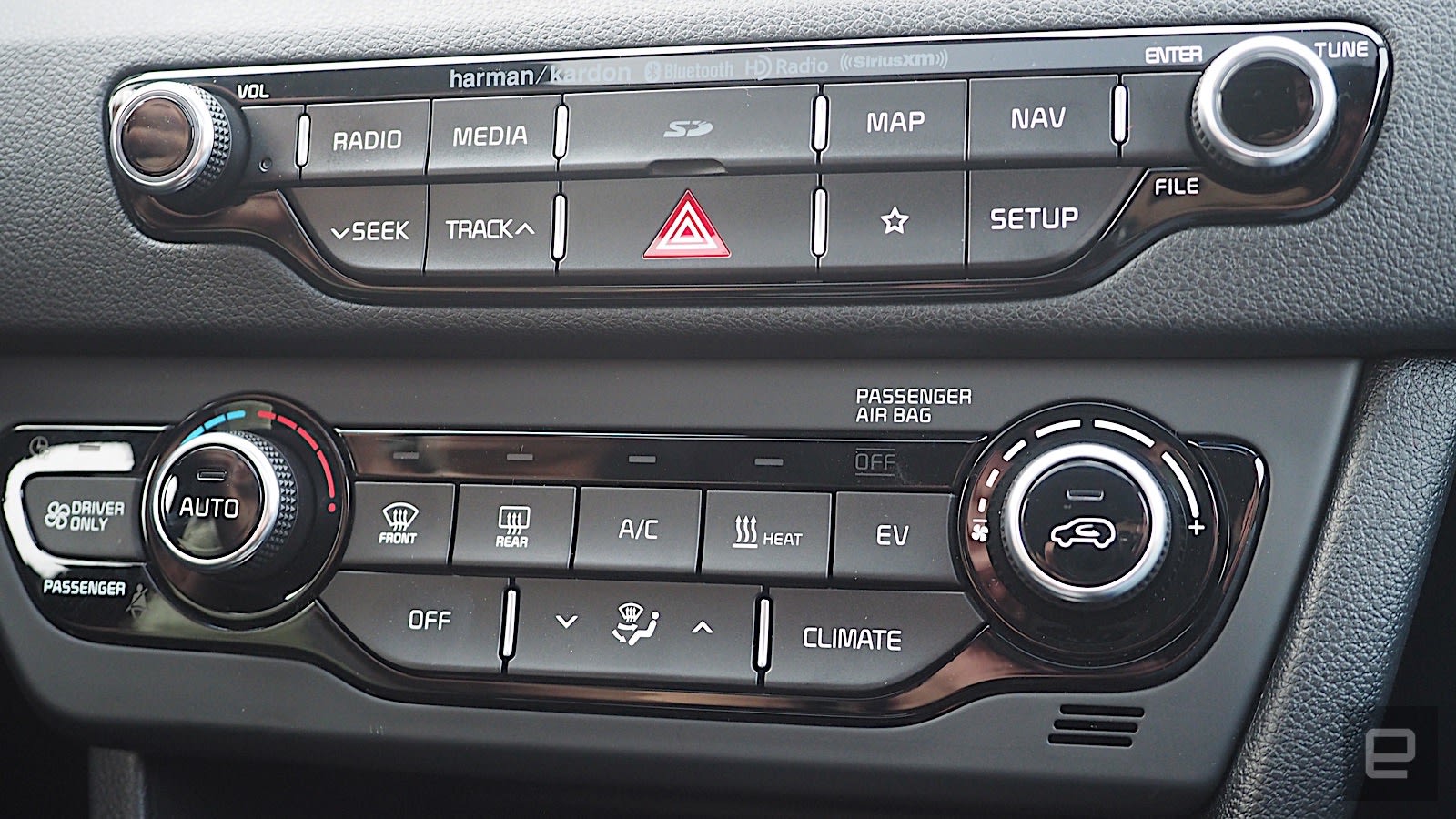 The Niro EV isn’t trying to be fancy, is what I’m getting at. It’s not promising you Grizzly Adams backwoods adventures like the Rivian or admittance to the cool kids table like Tesla. It’s not even positioning itself as a luxury sports toy like the Audi E-Tron. No, the Kia Niro EV is meat and potatoes. It’s the people’s EV — a sleeper that will surprise you with its utility and value.

On occasion Engadget will accept travel and lodging from auto manufacturers to test drive vehicles not yet available for review from a local fleet. We do this to make sure our readers have the latest information about new vehicles. This is standard practice in the automotive journalism world. This in no way colors our editorial coverage of the vehicle or of the automaker themselves.

The unfiltered joy of Christine…

The rise and fall of…