Kessler formed a company, Rocket Airplane Corporation, and drafted in experts to design a rocket plane and engine. He ended up commissioning three in total, and thanks to the lobbying of a local stamp collector, selected the frozen surface of Greenwood Lake, New York as the launch site. In the depth of winter on February 9th, 1936, a crowd of spectators trudged through the snow to observe the launch, officials from the Air Mail Service and American Rocket Society among them.

The rocket plane was to be shot from a catapult, and while the engine ignited on the first launch attempt, the catapult release was frozen solid. The rocket did eventually make it off the ramp that day, but landed mere feet from it. Kessler said frozen liquid oxygen propellent and a delayed catapult release was to blame — though he later claimed it was sabotaged by a mechanic who was resentful for not receiving credit for his role in the project. On February 23rd, Kessler tried again, with a CBS radio and camera crew joining the onlookers. He was advised that the weather was still unsuitable, but fearing the public would lose interest, he went ahead with the launch.

It was another failure. Though the plane made it off the catapult ramp, it flew erratically for a short distance before crashing into the ice and suffering irreparable damage. A second plane was wheeled out and this time, it was ignited while it lay flat on the ice. It picked up speed, took off, but one of the wings soon folded to stress and it, too, plummeted unceremoniously into the ice. It had just about made it over the New Jersey state line, however, and the mail bundle was handed over to the postmaster of nearby town Hewitt for processing. Spectators were unimpressed, and while Kessler technically achieved his goal, his rocket mail ambitions ended there.

Also in 1936, though further to the south in McAllen, Texas, American Legion Post workers were trying to think of ways to pay off the mortgage on their new building before the dedication ceremony that summer. The Post Commander’s 16-year-old son, whose hobbies included both rocketry and stamp-collecting, had one: Launch a mail-carrying rocket across the Rio Grande river into nearby Reynosa, Mexico. It would be the first international rocket mail delivery, and selling special stamps and the unique payload to philatelists was sure to be a money-spinner.

After the authorities on both sides of the river eventually came around, or at least agreed to the idea, crude rockets of laminated cardboard, fueled by volatile powder emptied out of firecrackers, were constructed. The first launch attempt met an explosive end almost immediately, but a second rocket easily made the flight and overshot its expected trajectory, coming to rest in the gutter outside the U.S. Bar in Reynosa. Several more launches took place on both sides of the border that day, with varying degrees of success and accuracy. Hundreds of letters were recovered from the launches, earning the McAllen American Legion Post the money they needed to cover the cost of the new building in time for its dedication. 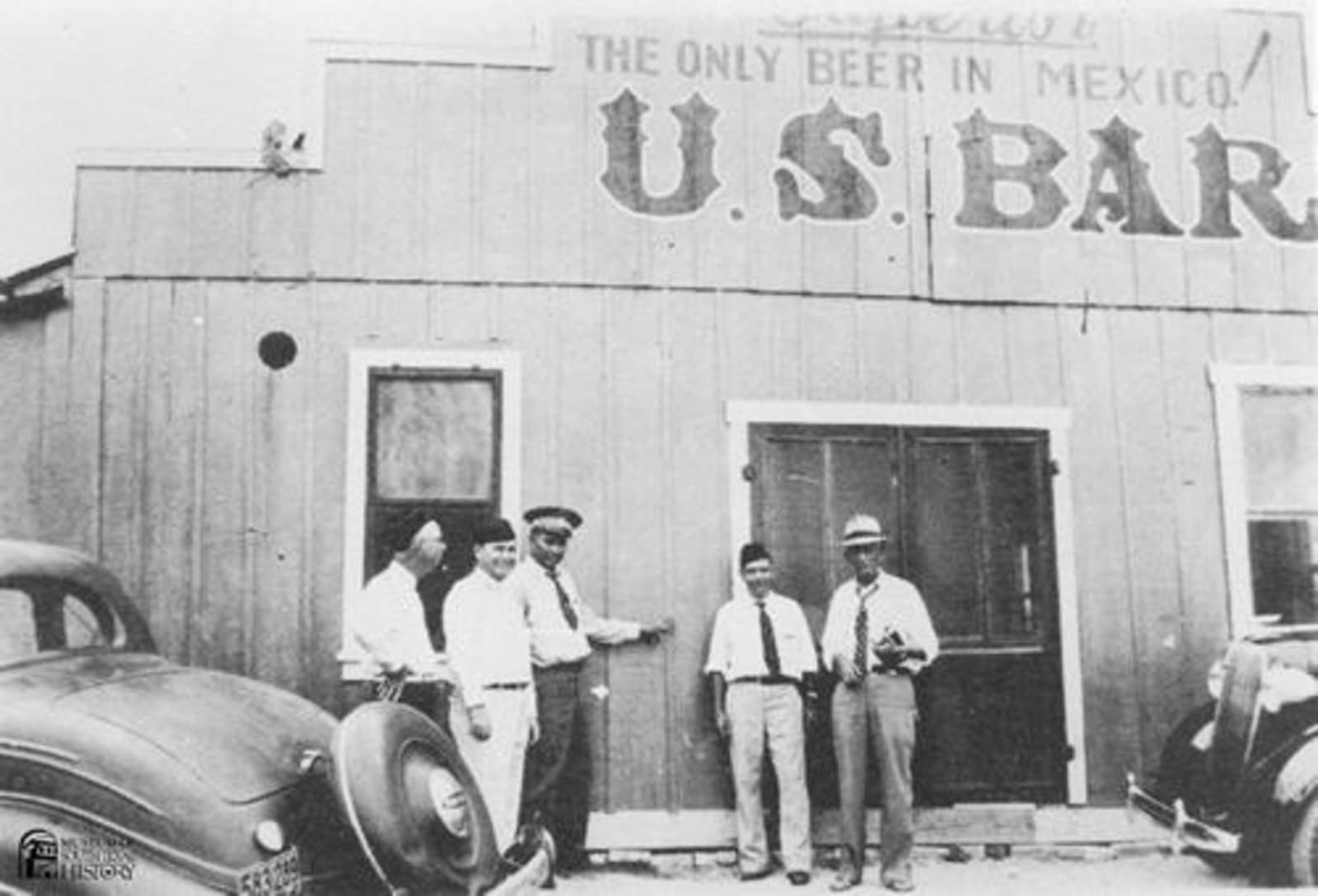 The U.S. Bar in Reynosa, Mexico

There are many other characters and stories associated with rocket mail’s history. Amsterdam-based dental technician A. J. de Bruijn, for example, had a passion for rocketry. Between 1936 and 1966, he and his colleagues at the Nederlandsche Ruitevaart Studio (the Dutch Space Flight Studio) orchestrated dozens of rocket mail flights all over Europe. Since 1947, the non-profit Rocket Research Institute has also conducted numerous rocket mail launches, primarily for the purposes of fundraising and experimentation. The use of missiles to drop propaganda leaflets during World War II could also technically be considered another successful implementation of the concept.

However, the momentum behind rocket mail — the idea that letters and packages could one day traverse the globe in minutes — slowed around the mid- to late-1930s. Its champions tinkered in isolation, the most ambitious among them still stuck on the hyperlocal scale of the next town over. Philatelists supported them, but this only served to slowly relegate rocket mail to a novelty. It was no longer the future of communication. At best, it was a hobby, and at worst, a scam.

That is until 1959, when the US Postal Service and Department of Defense fired a Regulus I cruise missile stuffed with thousands of letters from the deck of Navy submarine, the USS Barbero. It touched down at a Naval Station 700 miles away in Mayport, Florida, just 22 minutes after setting off. It was the first test of its kind: A true, long-range rocket mail launch that was also state-sponsored, not a private enterprise. 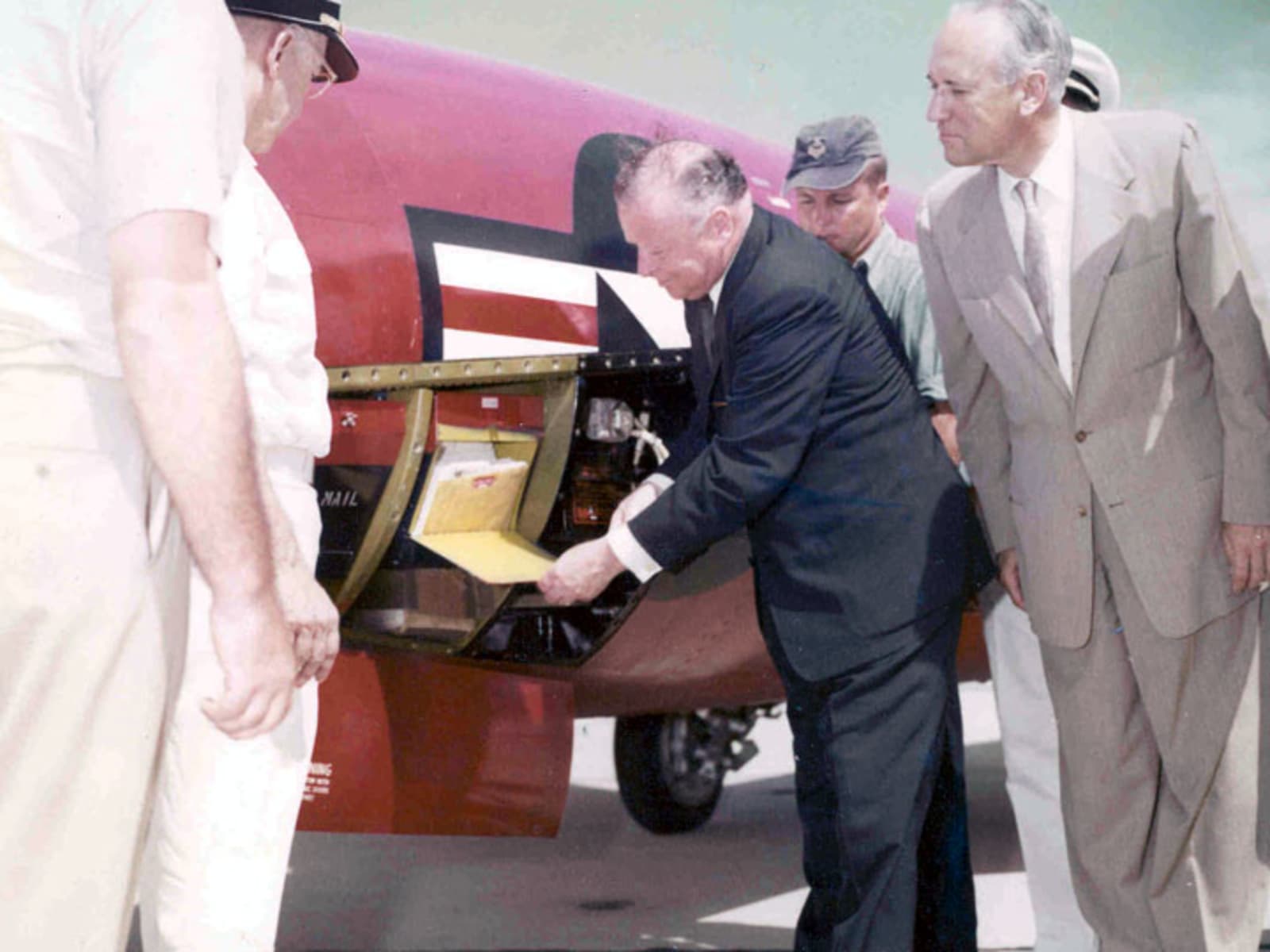 An excerpt from the souvenir letters inside read: “The great progress being made in guided missilery will be utilized in every practical way in the delivery of the United States mail.” An excited Postmaster General Arthur Summerfield said at the time, “before man reaches the moon, mail will be delivered within hours from New York to California, to Britain, to India or Australia by guided missiles. We stand on the threshold of rocket mail.”

There were no subsequent tests conducted by the Postal Service and/or the Department of Defense, however. It’s generally believed that the launch had nothing to do with missile mail at all, and everything to do with the Cold War. It was an excuse to flaunt the capabilities of the Regulus I for the benefit of the Soviet Union, and at great expense.

Rocket mail had been unjustifiable for a long time already. Even in Schmiedl’s time — when he first began his experiments in the late 1920s — regular zeppelin and airmail services ran locally and internationally in many parts of the world. By 1959, of course, transatlantic airmail flights were a daily occurrence. Rockets had always come at a high cost and their margin for error was unacceptable. 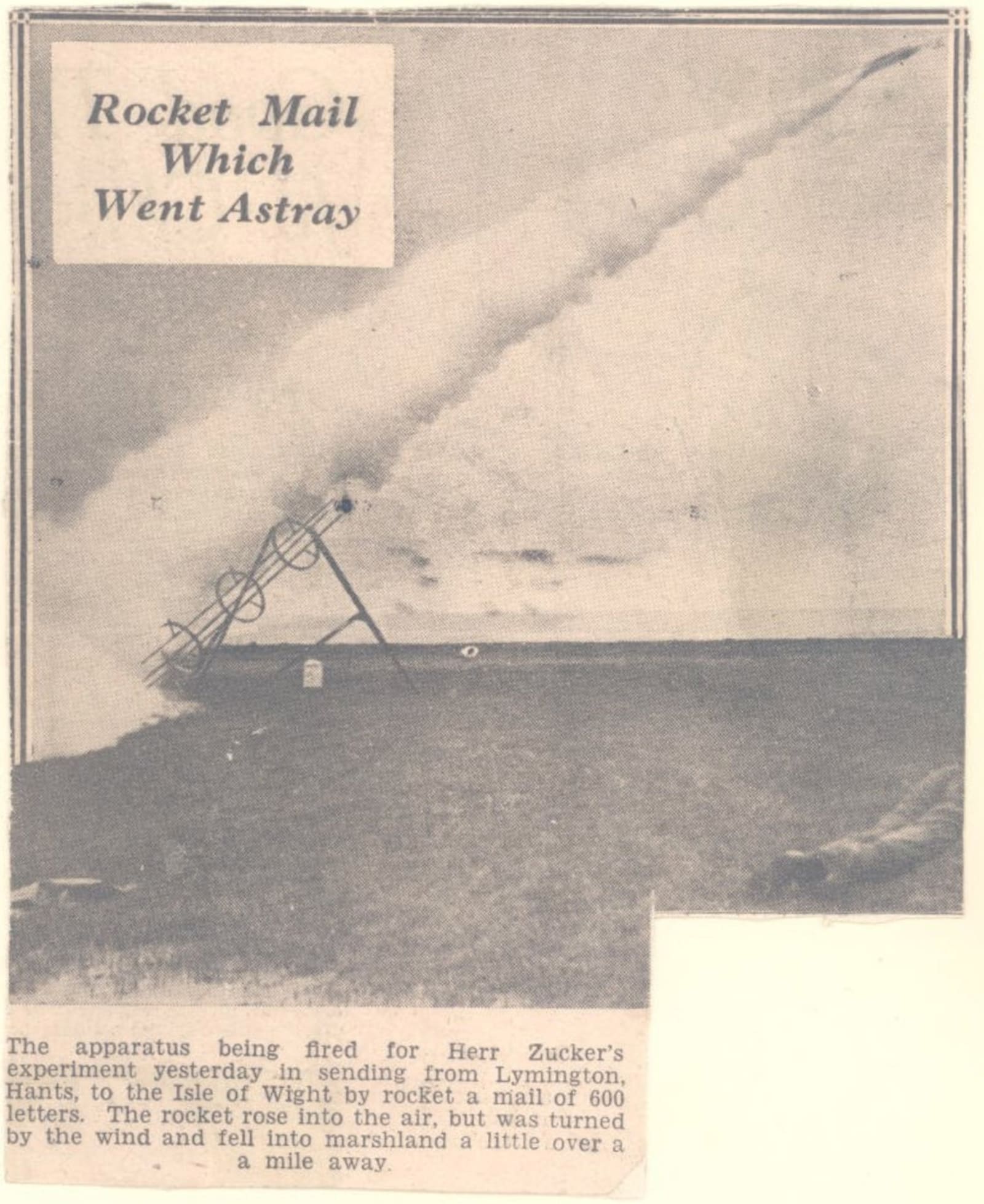 A newspaper article documenting one of Zucker’s failed rocket tests

Beyond the general impracticalities, rockets were machines of death; they were things to be feared. Especially after World War II, no bureaucrat could ever entertain the idea of rocket mail. Every ping on a radar screen could be a letter home, or an act of war.

Now, all the communication problems rocket mail was meant to solve barely exist. With the internet and email, letters and documents can be sent and received immediately. You can buy products online and have them delivered within an hour, or send a package across the world in a few days through an express courier service. Last-mile logistical hang-ups are being addressed with autonomous delivery robots, and likely drones in the near future.

In a way, the real forward-thinkers in the history of rocket mail were the philatelists, and the niche of astrophilately is still alive and well. Many decades later, the enthusiasts that funded the earliest experiments have been proven right, and their first edition shiny Charizards still circulate in collectors’ circles today.

Technological innovation didn’t begin with the development of the first integrated circuit in the 1950s. Backlog is a series exploring the era of possibilities: engineering feats that followed the industrial revolution, quirky concepts the future’s rendered obsolete, and inventions that paved the way for some of the technology we use today.

The unfiltered joy of Christine…