It took my friend 10 minutes to realize that the glasses on my face weren’t my usual ones and were actually a pair of the buzziest smart glasses available right now.

She didn’t figure it out when I somehow knew exactly what the group text we had just received said, even though I didn’t have my phone out. But as we were standing on the J train heading uptown, she asked, “What is that on your face?” She gestured at the tiny laser nearly grazing the top of my right cheekbone.

I’ve been wearing the Focals by North smart glasses for the past couple of weeks, and my friend was the first person to call them out. (Verge staff did, too, of course, but we’re nerds who keep an eye out for what people are wearing, so I’m not surprised.) These smart glasses are designed to look like any other pair of glasses. The front resembles generic plastic frames you could find through Zenni Optical or at Warby Parker. The sides are their giveaway, however: they have bulky arms that house a color laser, Bluetooth module, processor, and battery.

North originally released the Focals just last month for $999, but it has now shifted its pricing to a model that resembles how glasses are typically charged. The most basic pair, which I tested, now cost $599.99. Prescription lenses cost an extra $200, which you can submit to your insurance for reimbursement; blue light-blocking lenses cost $100; round frames cost $100; and limited edition colors, like tortoise and gradient, also cost $100. You could end up paying $1,000 for the whole package. You can’t buy the glasses online and instead have to go to one of the company’s showrooms in either Toronto, Canada, or Brooklyn, New York, to get fitted. 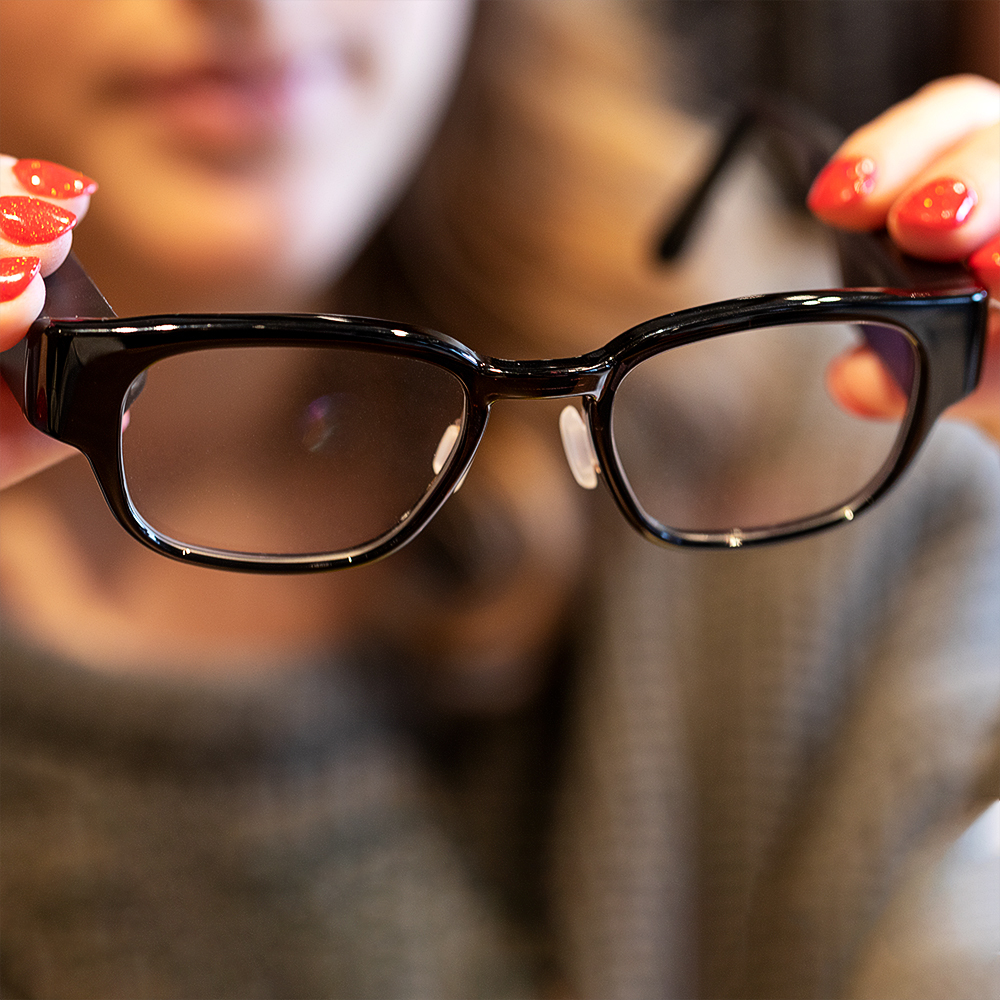 The adjusted pricing was a smart decision on North’s part. I polled friends on how much they thought the glasses should cost, and all of them thought $500 seemed reasonable. It’s still a lot for something that functionally works the same as a smartwatch, but it’s not unusual to spend that much on pair of standard frames with no smarts. Still, I wish North’s frames were more interesting. I didn’t enjoy wearing my pair, partially because I care about my appearance and felt lame because of the plain black style.

After a couple of weeks of wearing the glasses, I’ve found this to be true: they’re easily disguised as real glasses, which is both incredible and alarming if you’re the type of person who shivers at the idea of people keeping their phones at the dinner table. At the same time, the app support isn’t all here yet, particularly for iOS users, so until that improves, we don’t have to worry about people running out to buy these glasses in droves and never knowing if the person we’re talking to is paying attention. As someone who’s made it a goal to stop looking at my phone so much, they helped in that quest, although I’m not sure having notifications in front of my face is much better.

The glasses’ technology generally works well. They pair over Bluetooth to your phone and act like any other wearable. They show notifications, can call an Uber, and have Alexa built in. They’re controlled through a ring called the Loop, which is both a joystick and a button. The Focals won’t replace your phone, however; they are merely an accessory for it.

Both the glasses and Loop charge through a special case and proprietary system. That case charges over USB-C, but it should be set up somewhere permanently because the glasses and Loop require nightly charging, which I sometimes forgot to do. Plus, the case is bulky, and you won’t want to carry it around with you. I got about a day’s worth of use out of the glasses, but they’d die the next day without an overnight charge.

As far as comfort, the glasses are heavier than what I’m used to wearing, and even though they’re plastic frames, they have nose pads that can be uncomfortable. I found myself wanting to take them off to give my face a rest. The picture that the laser produces, which is 300 x 300 pixels, was clear enough for me to make out at home or in the office. They don’t work outside during the day, which is why North gives users clip-on sunglasses to go with them. The sunglasses made me feel even nerdier. They sort of look like Neo’s from The Matrix, but not as retro cool.

As I mentioned, the glasses’ software works similarly to a smartwatch. All of my phone notifications are mirrored on the glasses, and I set the glasses to chirp every time I received one. (Yes, there is a speaker on them. More on this later.) Strangely, this didn’t annoy me. But if you’re the type of person who has every app’s notification enabled, you’ll want to adjust that. You can mute the sound and notifications for when you’re in a workflow or otherwise in a situation where you don’t want to be disturbed.

The speaker and microphone in the Focals allow you to interact with Amazon’s Alexa assistant through them, which is neat, but most often, it just feels like a trendy feature that was tacked on. It sometimes didn’t register my commands and got stuck in a processing loop. You can ask Alexa a question, control your smart home devices, or set a timer, and it will even show you answers in the Focals’ display. I didn’t test the smart home device controls, but North says it should work. You can’t use Alexa to control music playback, which would have perhaps been the most useful case for it. I checked my phone fewer times when I wore the glasses, simply because I knew what was happening on my phone without having to look at it. However, I could fully eliminate having to look at my phone during my commute if I could control my music. A Spotify app would be much appreciated.

Music playback controls would be nice

North partnered with Mapbox to bring maps to the glasses, and while that was the feature I was most excited about, it ended up being a letdown. It only offers walking directions for now, and it often misdirected me or lost track of where I was. I mapped to the grocery store down the block from my apartment, and the glasses wanted me to walk past a street that I needed to get home. There are no driving directions because North doesn’t want people using these while they drive. You can call an UberX (no Pool or Black) from the glasses, too, and this feature worked well.

Other than mapping, text messages are the Focals’ biggest pain point because I’m an iPhone user. North can’t access iMessage, nor can it use my phone number. Instead, it has to take every message I receive, move it over to the company’s own servers, and then create an autoreply. I could speak my own reply, too, but the real problem is that whenever I texted back, it came from a separate, unrelated number that North assigned me. It also started a new thread, which confused my family and friends. One friend screenshotted my reply and asked if I had been hacked, even though North inserted a default message saying that I was messaging from my smart glasses. This workaround just doesn’t work. It isn’t viable, and while it isn’t North’s fault that it can’t access iMessage, it still brings the product down.

My friend thought I got hacked

More generally, I didn’t encounter many issues when wearing the glasses. I only had one especially annoying situation when my glasses started remotely triggering Alexa, even when I took them off and restarted them. The Loop also was sometimes unresponsive and slow when I tried to navigate. North thought it might have to do with a hardware malfunction, but it righted itself the next day without me having to swap out the unit.

I can’t recommend the Focals by North for iPhone users, particularly because of the iMessage problem. Android users, however, will be able to use their usual phone number, so if you’re willing to spend at least $600 on a smartwatch for your face, then it’s neat technology to try, it’s intuitive, and it feels like a hint at what the future of wearables might be.

Vox Media has affiliate partnerships. These do not influence editorial content, though Vox Media may earn commissions for products purchased via affiliate links. For more information, see our ethics policy.